The year 2016 is coming to an end, and it has been an eventful one for us. We are nearing the end of our first year in Japan. On New Year’s Eve last year, we were eagerly anticipating our move. Stress was high, and there were many uncertainties ahead. Now, looking back, it has been a tremendously satisfying experience.

As we expected, the transition to living in Japan hasn’t always been easy. There are some days when we just have to shake our heads and say, “why are we doing this?” Fortunately, those days are few and far between, and seem to be getting less frequent the longer we are here.

The language remains a frustration to me. My wife is picking it up more quickly, with more time to study. Our first round of language courses came to an end just before the holidays. Looking back, we have learned a lot. But the course had little emphasis on practicing dialogue, and I find myself still unable to carry on even a simple conversation in Japanese. I never expected to become fluent. I do want to be able to have a simple dialogue at the grocery store or a restaurant. That remains my goal as we begin a new year here.

Tonight, we will spend New Year’s Eve in Tokyo. Plans are to see some fire 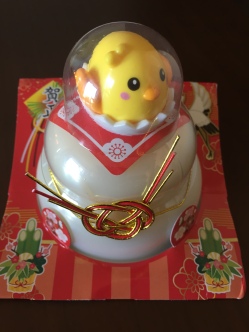 New Year’s mochi commemorating the year of the chicken – 2017

As we approach the beginning of our second year in Japan, we do so with excitement and enthusiasm. 2016 was a good year for us. We look forward to what 2017 has to offer.

To quote a verse from the chorus of the traditional folk song Auld Lang Syne, “We two have paddled in the stream, from morning sun til dine; But seas between us broad have roared, since auld lang syne.”

Have a Happy New Year!

My husband and I both grew up in the US mid-west, which up until the past few years, rarely experienced any earthquake activity. Of course now, with all the “fracking” going on, Kansas and Oklahoma actually do have increasingly regular seismic occurrences.

Japan on the other hand, existing along the edge of the “Ring of Fire” in the Pacific Ocean, is well-acquainted with earthquake and volcanic activity. Most everyone is familiar with the Great Tohoku Earthquake that occurred in Japan on March 11, 2011. That 9.1 magnitude quake and tsunami resulted in over 15,000 deaths, and billions of dollars worth of damage. It was the strongest recorded earthquake to ever hit Japan. You can read more about it here:

We knew, living here, it would be just a matter of time before we would experience an earthquake. At my husband’s office, everyone is issued an earthquake emergency kit — complete with hard hat and goggles, emergency food and water, flashlight and other emergency items. Most department stores, hardware stores, and home improvement stores have a section devoted to earthquake emergency supplies. We have also put together our own emergency backpacks to take with us in the event of an earthquake and evacuation. We even installed an earthquake warning app on each of our phones. The app sends out an audible warning whenever there is an earthquake in our immediate area. I currently have mine set to go off whenever there is a quake of local magnitude of two or above, but it also shows the information for all the quakes occurring in Japan.

We have had a few minor earthquakes in the 11 months that we have lived here.. sometimes I feel them and sometimes I don’t. If I am up walking around the apartment, or busy doing something, I often don’t notice these little magnitude 3 or 4 quakes.

The first “big” quake that we have had, occurred on November 22… just a couple of weeks ago. My husband has been traveling a lot the past few weeks, so he was in London, and I was here by myself when my earthquake app went off at 5:59 am (and his app went off in London…  lol). I woke up to see the curtains swaying back and forth, and hearing the doors in our apartment creaking as they swung back and forth. It was a very weird sensation — a kind of rolling and swaying — and made me think of the motion of a boat on the waves. This swaying went on for more than 10 minutes, and as I sat there in bed, I was not at all sure what I was supposed to do.

This first “real” earthquake wasn’t what I expected. I guess I was expecting rumbling and shaking with things falling and furniture moving, and this was just a silent swaying back and forth… up here on the 30th floor of our apartment high-rise. Granted… this quake was a 7.4 at the epicenter a couple hundred miles away, so it wasn’t all that strong here in Tokyo. But it was an unnerving feeling to watch everything swaying for such a long time. The curtains were swinging a good 10-12 inches back and forth, but it was such a gentle motion, that it didn’t even activate the earthquake latches on our kitchen cabinet doors! You have to credit Japanese earthquake-resistant construction methods!

Up north near the epicenter, this earthquake triggered a tsunami warning as well… and they had tsunami waves of 1 to 2 meters along the coast near Fukushima. Below is a photo of the tsunami wave moving up one of the rivers. 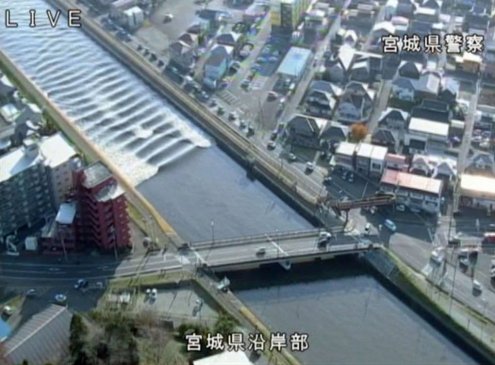 I spent the rest of the morning watching emergency news broadcasts of the tsunami. Numerous aftershocks of this earthquake have occurred, but only one or two have been strong enough to feel here in Tokyo. The Japan Meteorological Agency has actually classified this earthquake to still be an aftershock of the Great Tohoku quake that occurred five and a half years ago.

This first quake experience was scary and unnerving for me — even though it really wasn’t that strong an earthquake here. It was business as usual that day here in Tokyo… the trains were still running, cars were still driving, people were still walking to work and school. I am sure that this won’t be the only earthquake we will experience here, but hopefully it will be the strongest.