I know I have already talked some about the amazing toilet technology in Japan, and maybe you are tired of hearing about it, but just one more post about it.

The above photo is the WC – water closet in our apartment. It is the first door you see as you enter the apartment. Technically in the genkan  (entryway) of the apartment. Most traditional Japanese homes will have a separated bathroom:  the toilet in one room, and the sink (and usually washing machine) in another, and then a “shower room” generally near or in the sink room. I am not altogether sure about why this came about, but I think it probably has to do with keeping the clean areas away from the “dirty” areas. Hence…  our WC is just off the entryway to the apartment. The genkan is the area where you change your “outside” shoes for your “inside” shoes. It is very important here to not bring the outside into your inside.

This is a small little room, but not really unusual. Our house back in the US has a similar water closet in the master bath. Not a big deal, really.  The difference, though lies in the caliber of the equipment in this room. Never have I seen such fancy toilets in the US. Or anywhere else for that matter. These amazing toilets are at the pinnacle of toilet technology! 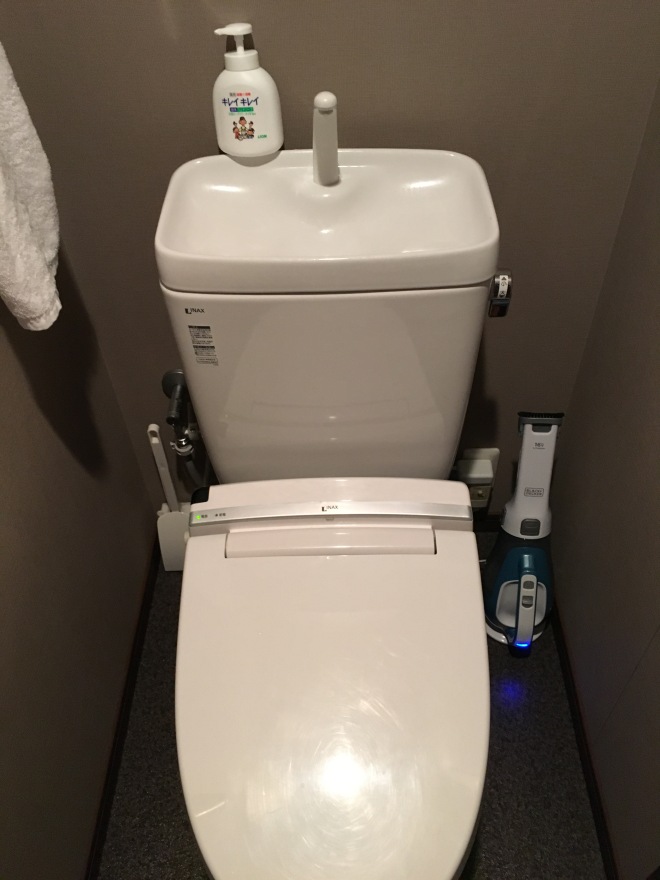 Now…  our toilet… the one in the above photo is by no means the fanciest toilet I have seen here in Japan. But it does have some nice features. The first thing you notice is the tiny little sink in the top of the tank. And yes… this is a nice feature when you consider that there is no free-standing sink in the room, and that the bathroom sink is in a completely different part of the apartment. It is nice to have a place to wash hands after using the toilet. Granted… the water that flows from the supply tube through the faucet is cold water, and there is no way to make it warm. But it does the job — and very efficiently too — as that same water just drains into the tank for the next flush. Soap and all. So maybe it also helps keep the toilet clean too?

Ok…  The control panel on the wall. Yes… you can flush by using the little handle on the side of the tank, but you can also use the wall panel to operate the flush too. Big flush, or small flush…  you choose from the two buttons on the top…  graphics are obvious.

Other features include heated seat (very nice feature…  surprisingly nice feature…  something that I never thought I’d care about, but I really like it!), bidet, and a separate “backside” washer (for lack of a better name) — the difference is all about location. That is all I am going to say about that. And at the bottom, under the plus and minus is the control for the temperature of the water spray. After all… who wants to be sprayed with cold water… right? Also, when you sit down on the seat, the exhaust fan in the WC turns on… lol!

The other buttons I haven’t really used…  although I have the translations from the cheat sheet the relocation company left for me. As follows (the big red button just turns off the water spray)… Under the red button are two small buttons:  the left one is labeled “deoderization”, and the right one is labeled “massage” (massage???  lol…Not sure about that one.)  On the right side next to the power button are two related buttons labeled “position” presumably controlling the position of the spray. Haven’t tried out any of those…  Ahem. 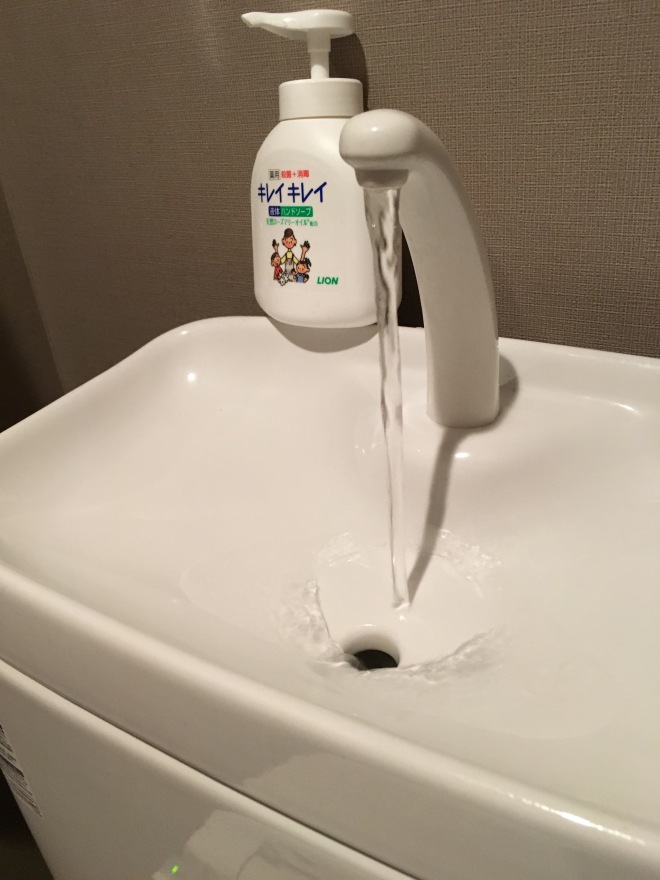 This is what happens after a flush…  while the tank is filling, you have the opportunity to wash hands. I really like this feature because it seems like such a good way to conserve water. You can wash your hands in the clean water, but then that wash water is what is used for the next flush. Makes sense to me.

Other toilets we have seen here in Japan. Our hotel toilet had pretty much the same features as this one, but with one additional…  It would make water sounds when you sat down… to help drown out other sounds, I guess. The toilets at Haneda Airport have the same feature except that the water sounds turn on when you are in proximity to the toilet…  you don’t even have to sit on it to have sound effects. I have seen toilet cubicles at department stores that have water sound effects or optional music at the touch of a button. Plus, they have disinfectant wipes for the seat — and toddler seats mounted on the walls so that you don’t have to juggle your toddler while you use the facilities. Nice touch!

This last weekend, though, I think I saw the most unbelievable feature of all. We were at a restaurant, and when I went into the toilet, as soon as I locked the door, the lid of the toilet lifted. It was kind of creepy, actually, but I didn’t even have to touch the toilet at all. Then, the toilet flushed by itself, and the lid lowered as soon as I unlocked the door. Amazing. Weirdly amazing…lol. What next? I don’t know…  I am constantly surprised and fascinated here in Japan.