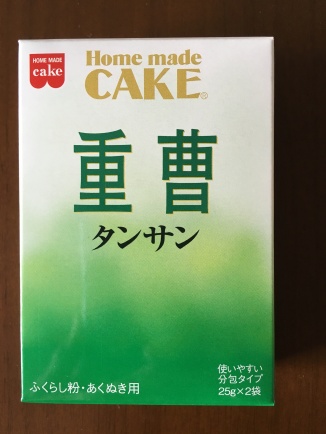 Triumph at the supermarket today! Lol…  I know, small things make me happy. These are two products I have been searching for these past couple of months since we moved to our apartment in Tokyo. And…  they were right in front of my face the whole time! Who knew?

I have had some difficulty stocking my Tokyo pantry because of the language issue here. When you move to a new place, you usually go to the store and buy staple products to have on the shelf: Flour, sugar, salt, spices, baking powder, etc.  And I have been searching high and low for cornstarch and baking soda, with no success… until now! Yes… the photos above show those two elusive products!

I have looked at that “Homemade Cake” package a hundred times, and just thought it was some sort of cake mix. I had no idea that here they use that to mean baking soda. And, even though I can now “read” the kana, those Japanese characters on the box would not have helped me one bit. The Katakana reads “ta n sa n,” which means nothing to me, but apparently means baking soda if you know the language. The two Kanji  characters above the Katakana does (by Google Translate) mean baking soda, but I don’t know the Kanji yet. I would never have even used Google Translate on this product, because I was sure it wasn’t the thing I was looking for. I finally googled it, and found another expat blog that talked about the same thing, and actually showed a picture of this product. Finally!

I bought “baking powder” weeks ago. It is very clearly labeled in English! I have no idea why some product names are written in English, and others aren’t. Flour was not too difficult because it had a picture of a loaf of bread. Sugar was a bit trickier because the bags of sugar were on the shelf right next to almost identical bags of salt! The only clue I had with that one was that there were pictures of fish on the package — presumably because it was “sea salt.” Confusing.

The cornstarch — the package on the right — I actually could have read with my rudimentary kana-reading abilities had I taken the time to look at this fairly nondescript little package on the top shelf of the baking aisle. It very clearly reads “ko-n su ta-chi” in Katakana. Oh Heavens!

It really is useful to be able to read the kana, although I am still very slow at it. I figure I am probably reading Japanese at about the kindergarten level right now. They do start their children out learning to read the kana…  Hiragana first, and then the Katakana. Learning the Kanji symbols comes later after they can fluently read the kana. Eventually I want to learn some of the more common Kanji. I read online today that newspapers at one time, were limited to using only 1850 of the most common Kanji symbols. I don’t know if that is still true, but even that number seems formidable to me.

I feel like I am making progress with the language here, but it is slow. These small successes along the way help keep me from feeling too overwhelmed. Lol… at least I now have cornstarch for the curry we are having for dinner tonight!