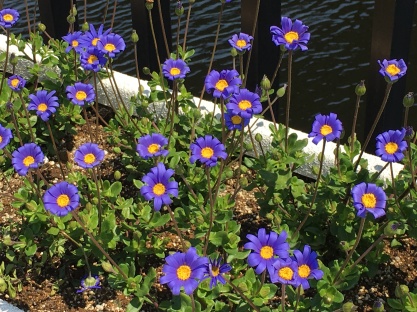 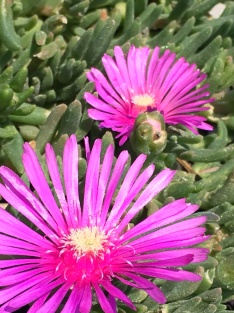 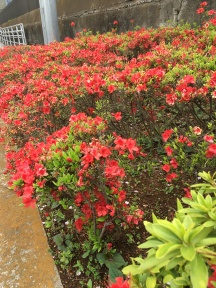 First off…  Spring has arrived in Tokyo. It isn’t always warm as I would like, but we have had some nice days. Above are some of the flowers and trees I see in my walks and runs along the canals here in Shibaura. The sakura trees are past their peak now and “snowing” blossoms all over the place.  The Japanese actually use that phrase to describe it, and there are “drifts” of blossoms piled up in corners and under all the trees. The wind blows them around and into the canals where they float on the water, and presumably out to sea. The azaleas are just starting to pop, and so are the dogwoods. The white dogwoods seem to be a bit behind the red ones that are already fully opened up.

Everyone here loves the springtime, and every weekend there are festivals and gatherings in the parks. Last weekend we found a food festival in Hibiya Park, near the Imperial Palace. Vendors of all kinds…  Japanese street food is awesome, and we found some really good craft beer there as well. (North Island Beer on Hokkaido!!!) Everyone spreads their blue tarps on the grass and spends time eating and drinking and enjoying time together. It is an amazing sight to see the tarps spread edge to edge and crowded with people.

I haven’t written a blog post in awhile, and there are several reasons why…  For one, things just don’t seem so weird and unusual here anymore. We are feeling much more comfortable in our new home, and blog topics just don’t jump out at us as much. It reminds me of when we first moved to Atlanta from the midwest. When we first got to Georgia we couldn’t stop staring at all the big tall trees. Where we had come from in the midwest, it was pretty flat and treeless. In Georgia we were surrounded by 80 foot pine trees. We stared at them for months. It all seemed so strange. And then… after awhile, we stopped noticing them. It all became so normal. And now, this “strange” place isn’t feeling so strange anymore.

For number two, I am trying to devote more time to studying Japanese. I may be feeling more comfortable in my new surroundings, but I still can’t speak much of the language. I still stumble over the most basic of phrases, and I just haven’t developed my ear for Japanese. I have to get better with this language! Then, number three, we are getting ready for another travel time. Next week we will be in Russia, then back here for a week, then “home” to the US for our daughter’s graduation. It will be a busy few weeks.

So…  on to the real topic of this blog post… Meiwaku. This is a cultural characteristic that we have noticed here from the very beginning, but have had trouble fully understanding. Finally, I found some information and an actual name for it. Meiwaku is defined generally as “being a nuisance to others.” The Japanese people are all about avoiding meiwaku! In everything they do, they are so careful to avoid being annoying or a nuisance to other people around them. You notice it everywhere. No one talks in elevators, or on the subway trains. When they do street construction, they always have someone posted on the sidewalk to direct pedestrian traffic, and they always bow politely and point the way through the construction. Even walking down the street, people will rarely look at each other as they pass, rarely greet each other, or even smile… and they aren’t being unfriendly. They are trying to be… unobtrusive.

One article I read explains it this way…  Imagine taking half the population of the US and putting it all in California. Then, crowding that population into only 20% of the land mass of California. That is Japan. So, with so many people crowded into such a small amount of space, in order to get along, they have developed a culture centered on cooperation and harmony. Somewhat like the Golden Rule, Japanese people try NOT to do to other people what they would not like to have done to them. Everyone is very careful to stay out of your “personal space,” including your personal business. Here…  we live our lives in our personal bubbles, and try not to “bump into” each other and annoy each other. “Sumimasen” is a word that is used frequently in the Japanese culture. It means “excuse me,” but it is used in greetings, and as a way to apologize for any potential instance of meiwaku. It is so different from the brash and “in your face” culture of the US. I kind of feel like the US could take a few lessons from the Japanese as to how to treat one another.

There are rules against too much noise in homes and apartments. Some apartments won’t allow musical instruments, or barking dogs…  and though I haven’t seen it in writing, noisy activities like vacuuming and laundry should not be done late in the evening or at night. My Japanese vacuum cleaner has a “quiet” mode. Living on the top floor of our building, we never hear noise from our neighbors…  in fact we have never seen any of our 30th floor neighbors. The only noise I hear is the elevator… and that because we are on top of the building right under the elevator mechanisms. It is amazing to me actually that we live in the largest city in the world, and our little part of Tokyo is so quiet and peaceful. I kind of like it . Meiwaku…  we should all try to avoid meiwaku.