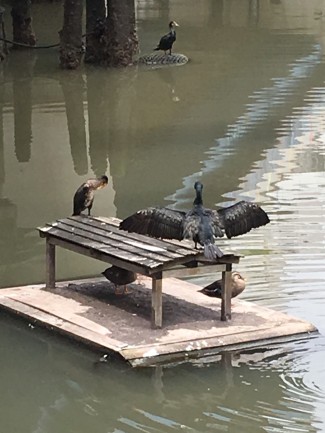 I took this photo of a cormorant along the canal this morning. I was walking to the spouse’s Japanese class at the company where my husband is working here in Tokyo. The water birds like to gather here in this spot under the monorail track…  and apparently have for quite awhile since the city has provided nesting and perching boxes and floats on the canal for them.

Despite all the heavy rains we have had the past few days, the canal was really low — the tide was out — and the water was almost flat calm. Hardly a ripple. No wind, and the humidity hung in the air. this guy had his wings spread to try to dry them. If you know about cormorants, they don’t have the same oily coating on their feathers that other water birds do, and they sit really low in the water… with usually only their head and neck above water. When they get out of the water, they have trouble getting their wings dry again. That is why they stand like this. I imagine he was having a really hard time getting dry with this humidity.

The baby ducks  — actually they have grown to be “teenage” ducks at this location in the canal — were swimming around, feeding around the float. They still hang together in a group, and mama duck just sits on the float and watches them now. There seems to have been a Spot-bill Duck population explosion here this summer. Baby ducks and half grown ducks are everywhere on the canals around our apartment. They are so cute, and so fun to watch. We have actually made casual acquaintance with a Japanese man who also watches the ducks on a nearby canal. He stops and talks to us now and then. Thankfully, his English is much better than our Japanese.

As I walked along the canal this morning the cicadas were droning, “see-see-see-see-see.” I have noticed that their sounds change during the course of the day. They make different sounds in the mornings and evenings. As I walked home from the supermarket this afternoon, their sounds had changed to “we-o-we-o-we-o.” Weird, huh? I never noticed this before…  and I have been listening to cicadas all my life!

I saw a little girl walking along the canal. She couldn’t have been more than 6 years old… she was missing her two front teeth… and as she walked along all by herself, she chattered excitedly on her cell phone. This struck me strange for two reasons…  Number one that she was so young (and alone!!) and already so caught up with her cell phone! Number two… that she was talking out loud on that cell phone!

The Japanese people are very private people, and you rarely see (or hear) them actually talking on their phones in public. They are almost always staring at their phones… texting on their phones, but they don’t speak on them very often in public. In fact,  there are very prominent signs on the trains and buses telling people to silence or turn off their phones. It is something of a cultural faux pas to talk on your phone on the subway, and I have heard that bus drivers will tell patrons to stop using their phones on the buses.

Walking around Tokyo, hardly anyone makes eye contact. Everyone walks around in a bubble, and there is rarely any interaction. It used to bother me… thinking that in some way they were rejecting me because I was a foreigner. But it is completely different when you get away from Tokyo. When we hike at Mt. Takao, everyone we meet greets us with “Konnichiwa!” (Hello!) And sometimes — especially the kids — will greet us in English! lol. It is a constant string of greeting all the way up and down the mountain.

Anyway… I know this is a bit of a rambling post, but… I just wanted to talk about my day. This place…  I am constantly amazed at what I see and hear and experience.