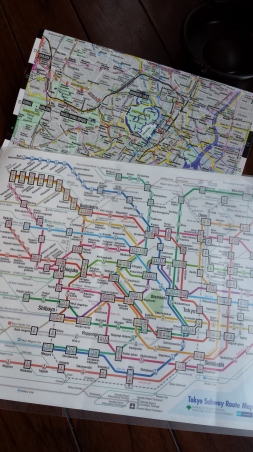 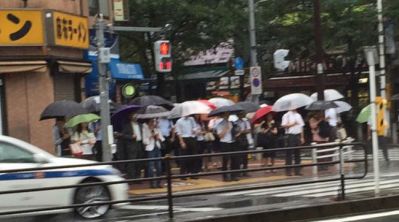 One of the best things about the location of our apartment, is its proximity to my husband’s office. It is a 10 minute walk for him to get to work… no commute via car or transit. It has been a nice change for him from his hour-long car commute at home in Atlanta.

Today, however, we had to travel to another part of Tokyo to go to the Indian Embassy to get visas for an upcoming business trip. Lots of people here commute via chikatetsu (subway) and densha (electric train –JR line is not a subway, but is raised above ground.) Many commute for an hour or more to get to their jobs. The train system here in Tokyo is extensive, convenient, efficient, and inexpensive. But, at “rush hour” the trains can be really crowded… to the point that the station attendants have to shove people into the train so that the doors can close.

Our trip today started with a walk to the station in the rain. Rush hour sidewalks are also crowded, so rush hour sidewalks with everyone carrying an umbrella — lol — was crazy! But another thing to know about Japan, is that even though it is very crowded, most people walk and travel inside their “bubble.” What does that mean? Well… it means that everyone walks like they are the only ones on the sidewalk, everyone stands in crowds or on trains like they are the only ones there. It isn’t being rude… for them, it is being unobtrusive. It means that they stay out of your business, but because it is so crowded, not necessarily out of your space. It takes some getting used to… the first time you get on a packed train where everyone is squeezed in like sardines, and you can’t possibly fall over, yet… no one pays any attention to anyone else. We are all squished together, but doing our best to ignore everyone else.

It is an interesting phenomenon. As we were standing on the train to the embassy, all the Japanese people were quiet… rarely any talking. The only people talking, that I saw, were the foreign tourists. In a place that is so crowded with people, it is amazing that there is such… harmony. No one pushing or shoving (except to get on the train… lol), no one yelling or being loud and rude. Just this interesting ability to isolate themselves in a crowd.

I have to say… I like that. I am getting used to this culture, and it is all becoming so normal and natural.