I just got back from my (almost) daily walk to the supermarket where I bought this bottle of “Salty Litchi” drink. It was sort of an impulse buy from a new display near the check-out line. Although not officially a “sports drink,” it actually works quite well in that respect. A lightly sweetened fruit drink (only 10% litchi juice), with just a bit of salt added. It is very tasty, and refreshing  — as well as re-hydrating — on a hot day.

Tokyo is hot in the summer. Temperatures aren’t as high as they are in Atlanta, or in the midwest where we grew up — it rarely gets above the low to mid-90’s — but factoring in the high coastal humidity makes the heat index routinely creep up well over the 100 degree mark. Today as I walked my two kilometers to and from the store where I shop (only 1.2 miles total) the heat index was only at 99 degrees, and there was bit of a breeze blowing. Added bonus for me on the way home today was that I was carrying several items from the grocery store freezer section — so the walk home was not too bad. 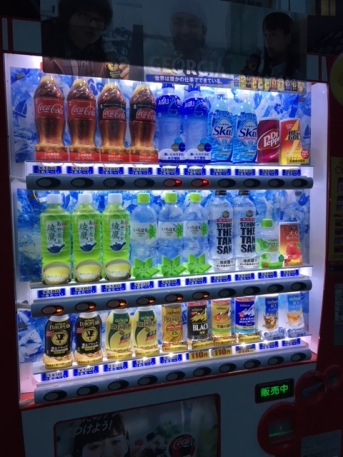 One way to beat the heat here is to stay hydrated, and there are many opportunities for that. Vending machines dispensing cold drinks are everywhere. I don’t think you can  walk a block here in Tokyo without coming across one — or several. They have a good selection of drinks: usually  several brands of tea (unsweetened), water and juice drinks, and iced (and hot) coffee. Some even dispense energy drinks. Most will have a Coca-Cola product of some type, and occasionally Dr. Pepper, but not many other carbonated soft drinks. Tea and coffee drinks are more popular here. Conbinis (convenience stores) are numerous here, also making it easy to pop in for a cold drink or snack… Or just to enjoy the air conditioning for a few minutes.

Most office and apartment buildings in Tokyo don’t air condition their lobbies or elevators, and many offices are only air conditioned during working hours in order to save electricity. The “Cool Biz” campaign calls on workplaces to set their air conditioning at 28C (about 82F), and allows for employees to dress down a bit and skip wearing jackets and ties for the summer months. Still, a few minutes walking out in the heat, or even waiting for the elevator can make the sweat start to pour. Everyone carries a small washcloth “sweat towel” when they go out. My husband has a small USB fan to plug into his computer… just to keep the air moving in his office.

But summer isn’t just about dealing with the heat. Protection from the intense sunshine is important too. Tanning is not popular with most Japanese, and they — especially the women — go to great lengths to protect themselves from too much sun exposure. Sunscreen is SPF 50 here, and worn daily. Sun hats and sun umbrellas are commonly used. Many people wear long sleeves and long pants even in the the summer heat. Even runners and joggers often wear long sleeves and tights. Women buy long finger-less gloves to cover up bare arms, and light scarves to cover necks and shoulders.

There are a few people who go out to the beaches or parks to tan… but not many. At Odaiba Beach across the bay from our apartment, you will find a few sunbathers, but  mostly men or foreigners. Families will often set up small pop-up cabanas to sit in on the sand. 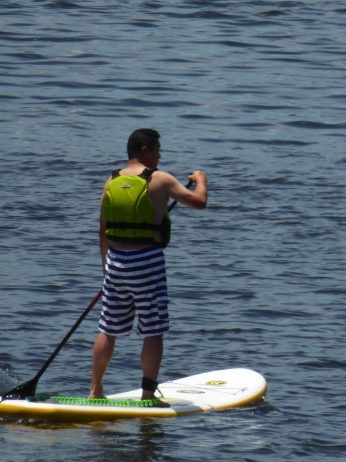 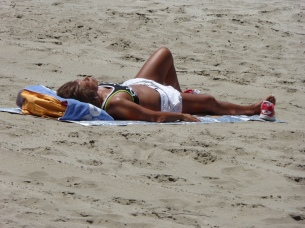 With no car, we are dependent on walking and public transit to get around in Tokyo. Living in a place where you have to get out and walk in order to go anywhere, can be a challenge in the hot, hot summer. I find that I tend to limit my trips out during the summer, and spend more time in the apartment, going out more often in the late afternoon when things start to cool down. We still have to go out in the heat, and we manage it… But we are looking forward to cooler temperatures in the fall. Until then, the common greeting is “Totemo atsui desu ne!”(It’s very hot, isn’t it!) 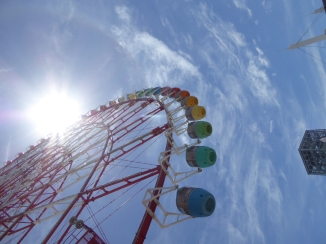