It’s the “he” part of the blog team (but the “she” part of the team contributed with ideas and discussion). As I write this, we are approaching the two year, nine month point as residents of Japan.

Looking back, I’ve learned a lot about Japan. My wife and I have had a great opportunity to be immersed in this amazing society. We’ve traveled around the country, we’ve seen many things, and we have interacted with people. More than tourists, we can legitimately call ourselves residents. We’ve even learned some of the language, and more importantly, how to communicate without speaking fluently.

But the more I learn about Japan, the more I realize that I have just touched the surface. There is a subtle (sometimes not so subtle) undercurrent of difference about this culture that is hard, as a Westerner, to describe. Of course, the language is part of it. It is possible to translate some of the words between Japanese and English. But the meaning often gets lost in translation. Some things, we’ve found, just don’t translate and it’s hard to get a shared understanding.

And it goes deeper than language. There is a difference in the thought process that is palpable. I’m sure there must be social science studies of this, or if not, it would be a fascinating study. As a layman, I can only try to describe my observations as best I can. 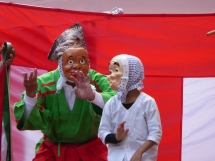 Players in a festival at the bottom of the mountain

Perhaps it’s best described as cultural disconnects. I see the Japanese, by and large, as a pleasant people who find ways to enjoy their lives. They have a deep sense of honor and respect for one another. They can at one time be seen engaged and interacting with their friends and families, and at the same time isolating themselves in a sea of humanity.

The more I try to describe the differences I see, the harder I find it to do so. In so many ways, I have been accepted as an adopted resident of this country. And in so many other ways, I know that no matter how long I’m here, I’ll never be fully integrated into this culture.

To begin with, I look…well, like a tourist, and that’s not something I can change. Japan was a closed society for many centuries, and even with more and more Westerners coming to Japan, we still stand out as being different. Compare that with the US, which despite what some would want you to believe, is a country of immigrants. That is what the United States of America was founded upon. There are many Asian-Americans, and it’s not uncommon to see people of different ethnic backgrounds all being citizens of the US. That is a basic difference from Japan.

In the time I’ve been in Japan, I’ve found the people accepting, and a bit curious, about my background. My experiences and perspectives are very different from theirs. And, I’ve found my Japanese colleagues want to understand as well as share from their viewpoint.

I’ve learned that there are many, many differences in the culture here, more than I could ever have anticipated. And I learn something new, literally every day.  Perhaps that is why it is so intriguing to be an adopted resident of Japan.